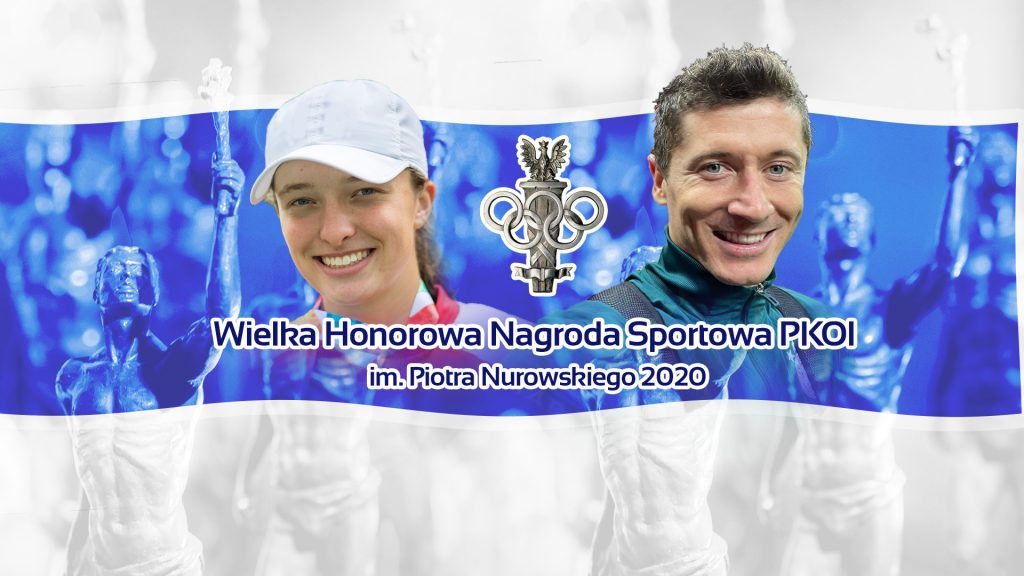 The Polish Olympic Committee’s Chapter of the Grand Honorary Sports Award of Piotr Nurowski selected the winners for 2020. These are: Iga Świątek, Robert Lewandowski and Piotr Sierzputowski, the coach of our tennis player.

The Polish Olympic Committee’s Grand Honorary Sports Award of Piotr Nurowski for 2020 was granted in two categories. In the “Player” category, the laureates were Iga Świątek (tennis player, the champion of the Roland Garros Tournament) and Robert Lewandowski (the captain of the Polish national football team, named the men’s player of the year at the Best FIFA Football Awards 2020). In the “Trainer” category, the award was given to Piotr Sierzputowski (Iga Świątek’s coach). There was no prize awarded in the “Team” category.

– We are extremely proud of the achievements of Iga Świątek and her trainer, and Robert Lewandowski. All of them have achieved spectacular and unquestionable successes. Their attitude and results set a great example for everyone and prove that talent, hard work and determination bear fruit. Both Iga Świątek and Robert Lewandowski are great ambassadors of Poland in the world. We are impressed with their performance – said Andrzej Kraśnicki, the President of the Polish Olympic Committee.

The Grand Honorary Sports Award of the Polish Olympic Committee was established in 2009. This distinction refers to an Award of the State Office of Physical Education and Military Training granted in 1927-38 and honours the greatest sports achievements of the past year. In the inter-war period its laureates were Halina Konopacka, Janusz Kusociński, Jadwiga Wajsówna, Stanisław Petkiewicz, Stanisław Marusarz…

The first laureates of the „contemporary” Award were: for 2009 in the sports category: ex aequo – a winner of three medals at the World Championship in Liberec and the triumpher of the World Cup in 2008/2009 – Justyna Kowalczyk (cross-country skiing) and a record-holder and world champion (Berlin) in the hammer throw – Anita Włodarczyk (athletics), a trainer – Aleksander Wojciechowski (rowing) and a Polish men’s representation in handball (bronze medallists of the World Championship).