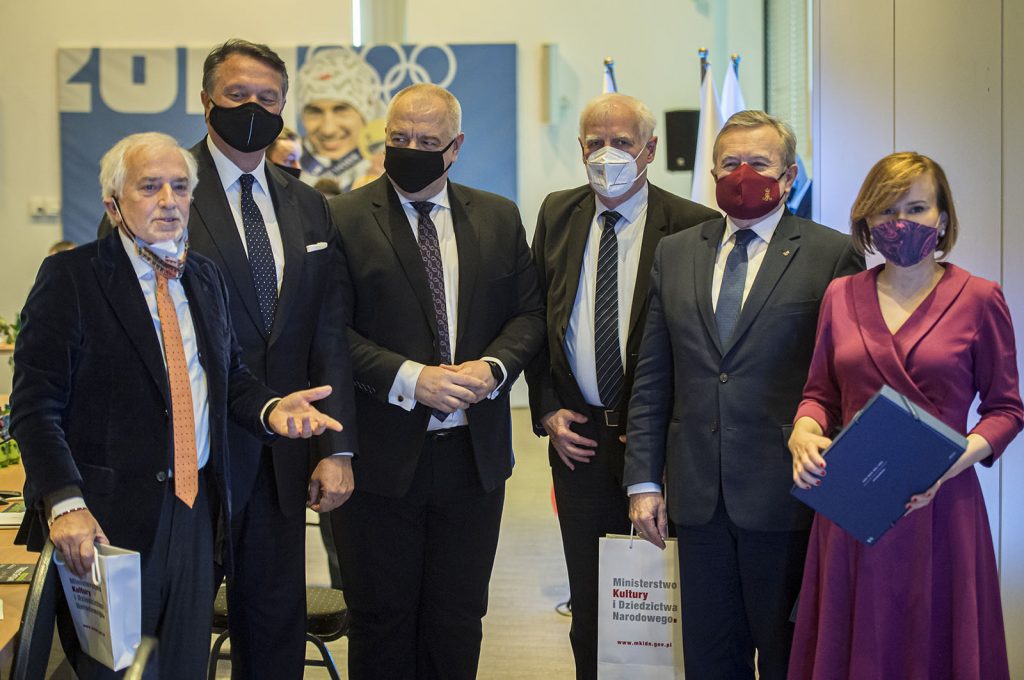 The Silesian Voivodeship has expressed its readiness to co-organise the 3rd European Games, which will be held in Poland in 2023. It wants to join two organisers – Cracow and the Region of Malopolska. A meeting regarding the most important issues of the 3rd European Games organisation was held at the Olympic Centre of the Polish Olympic Committee. It was attended by: Jacek Sasin – the Deputy Prime Minister, the Minister of State Assets and the Government’s Plenipotentiary for the coordination of preparatory activities for the organisation of the 3rd European Games, Piotr Glinski – the Deputy Prime Minister and the Minister of Culture, National Heritage and Sport, Anna Krupka – the Secretary of State in the Ministry of Culture, National Heritage and Sport, Niels Nygaard – the EOC Acting President and Andrzej Kraśnicki  –  the President of the Polish Olympic Committee. The government representatives expressed their full support for this event.

– On behalf of the Government, I would like to confirm all the declarations made so far, which involve the support for the organisers in the field of logistics and necessary infrastructure projects. I am glad that Silesia wants to co-organise the 3rd European Games and that everything indicates that athletics, a discipline in which Poland has many successes, will be included in the programme. The Silesian Stadium, which has the status of a national facility, would host the best athletes from Europe – said the Deputy Prime Minister, Jacek Sasin.

– We are serious about this event and all our responsibilities. Athletics will certainly raise the weight of this event even more, and the inclusion of Silesia to the organisers will facilitate the process of organising it. It has enormous educational and cultural values, which will translate into public good – emphasised Piotr Glinski, the Deputy Prime Minister and the Minister of Culture, National Heritage and Sport.

The Marshal of the Silesian Voivodeship prepared for the EOC and the NOC of Poland a letter of intent regarding joining Silesia to the organisers of the 3rd European Games.

– I declare my commitment to the organisation of this high-class, multinational sports event with a global reach. It will be dedicated to the best players in Europe and will promote the most precious values of sport and the Olympic Movement. Furthermore, it will honour the Silesian Voivodeship, where a modern sports infrastructure has been built over the years. The Silesian Stadium – a sports arena with a history, soul and many memories, occupies a special place in this event. It is a sports facility with a rich past, present and future. Both Silesia and Poland are proud of it! – wrote in the letter of intent Jakub Chelstowski, the Marshal of the Silesian Voivodeship.

– We met the head of the European Athletics Association at the European Athletics Indoor Championships in Torun. I am convinced that in the near future we will manage to agree on the conditions regarding the inclusion of this discipline in the programme of the Games. During the 3rd European Games, athletes will be able to get qualifications for the Games of the XXXIII Olympiad Paris 2024 and compete in the European Championships in many disciplines. It will be an important sports event in our country and in Europe – said the President of the Polish Olympic Committee, Andrzej Krasnicki.

The European Games 2023 is not only a celebration for athletes and fans. It will be a decisive stimulus, significantly strengthening the development of the regions involved in the organisation of this event. As a result of the coronavirus pandemic, tourism, which is a key economic sector, has been facing a serious crisis. It will be a  great chance to end this impasse.

– The Malopolska Region decided to take a role of an organiser in Minsk, during the previous edition of the European Games. And from this moment, step by step, we strive to fulfil all the commitments we have made. Today we are ready to take the next step, i.e. operational and preparatory activities. We are glad that the declaration of Cracow is upheld and the city will be actively involved in the preparations for these Games – said Witold Kozlowski, the Marshal of the Malopolska Region.

– Cracow has never withdrawn from the function of being an organiser of the European Games. During the Saturday meeting with the EOC, I confirmed our readiness to co-organise the European Games, and in a conversation with the Acting President of this organisation, Niels Nygaard, I heard a clear message that he does not see any possibility to implement this project without Cracow. This is an important information for those who claimed in the media that the Games should be organised without the brand of Cracow. We will fulfil our obligations and it is obvious that we want our Polish partners to fulfil their obligations too. And this is mainly connected to the financial guarantees for Cracow or a special act. I am glad that also Malopolska, having received the support from Silesia, clearly declares its full commitment in organising the Games – emphasises the Mayor of Cracow, Jacek Majchrowski.

The 3rd European Games Krakow-Małopolska 2023 will be the biggest multidisciplinary sports event in Europe. For the first time, it will be organised in the European Union.

– I have talked many times about supporting the process of organising the European Games – both in the European Parliament and with representatives of the European Commission in Brussels. We need such initiatives to stimulate Polish tourism, economy and promote sport in the Olympic edition. It will be a great chance to show both our opportunities and successes, contribute to promotion of Poland in Europe and to integrate everyone around common sports values and emotions.- said Tomasz Poreba, the Vice President of the Polish Olympic Committee, the NOC of Poland Board Member responsible for the 3rd European Games Krakow-Malopolska 2023.

– I am glad about the Polish government’s approach to this event and the understanding of the benefits it brings – especially after this difficult time of the pandemic. Previous editions were broadcast in 196 countries, watched by a total of 2 billion viewers (500 million on the Internet and 800 million on social media). This translates into the promotion of the country and the revival of tourism – both nationally and locally. There are also discussions with the European Broadcasting Union regarding the rules of broadcasting this event – emphasised Hasan Arat, the Chair of the Coordination Commission for the 3rd European Games.

The European Games is the flagship sports event of the EOC. They are organised every four years with the participation of 50 national teams from the European countries. The decision to entrust the City of Cracow and the Malopolska Region with the organisation of the 3rd   European Games was taken on 22 June 2019 during the extraordinary meeting of the General Assembly of the European Olympic Committees. It was taken unanimously by all the NOCs within the EOC.

– I am glad that the 3rd European Games will be organised in Poland. Poland is renowned for sport and has a great experience in holding such events. I am convinced that it will be amazing Games. I can assure you that we do not want to earn money, but following the example of other countries, organise something meaningful for Europe and the host country – emphasised Niels Nygaard, the EOC Acting President.

From the 6th to 8th March, a delegation from The European Olympic Committees (EOC) was hosted in Warsaw. There were first meetings and discussions at the Olympic Centre regarding the final sports programme and the most important organisational issues of the 3rd European Games. The authorities of the EOC also met with Rafal Szlachta – the President of the Polish Tourist Organisation. The aim of the meeting was to strengthen cooperation between tourism and sport at the international level; moreover, during the meeting the concept of Poland’s promotion through the European Games 2023 was developed. The Polish Tourist Organisation declared that it is ready to cooperate.