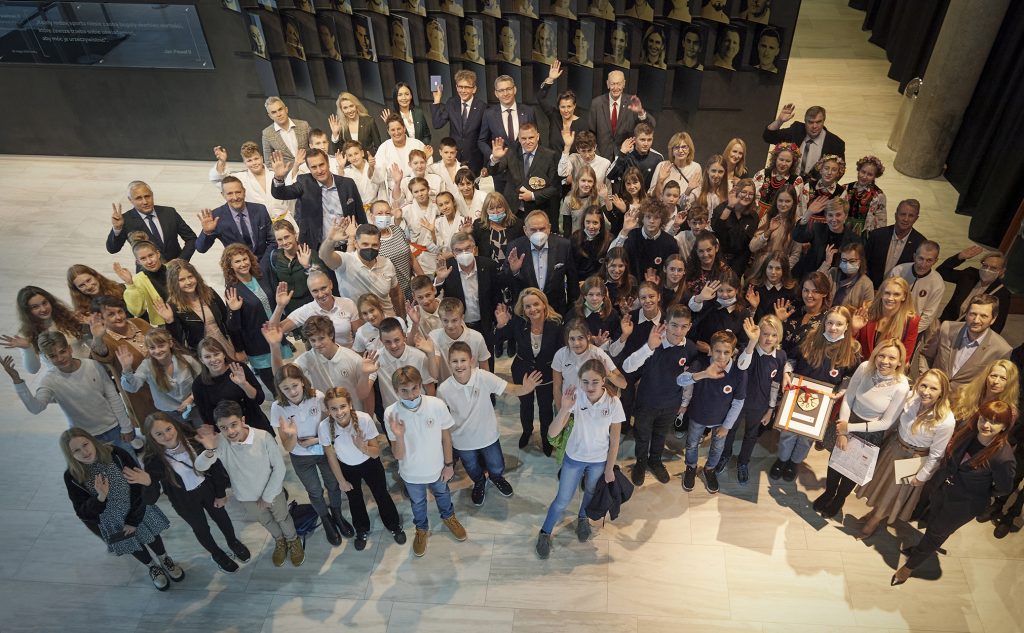 On Tuesday, November 16, the President of the International Olympic Committee, Thomas Bach was a guest at the Olympic Centre of the NOC of Poland, where he met students attending schools related to the Olympic movement.

Thomas Bach came to Poland for a two-day visit at the invitation of the Chancellery of the President of the Republic of Poland, Andrzej Duda who the day before handed him the Grand Cross of the Order of Merit of the Republic of Poland. It is awarded to foreigners and Polish residents living abroad for distinguished contributions to international cooperation or cooperation between Poland and other countries and nations.

However, the key part on that day was played by the school students from all over Poland who came to the Olympic Centre to talk to the IOC President. The meeting started with a judo show of the players of MKS “Olimpijczyk” Włocławek prepared under the watchful eye of the trainer, the Olympic medallist from Atlanta (1996) – Aneta Szczepańska.

The students during the presentations showed their connections to the Olympic movement and talked about the selected sports events attended very often by the Polish Olympic medallists and Olympians. The students from Pacyna presented, among others an Olympic flag with autographs of medallists and Olympians as well as the former IOC President, Juan Antonio Samaranch. Thomas Bach also put his sign on the flag.

Then the honorary guest, Thomas Bach, took the floor: “I am very glad that I was able to see very interesting presentations of schools and the involvement of the Polish Olympic Committee in sport and Olympic education, which left me speechless. The number of events and activities organised by you is very impressive and I can see the commitment coming straight from the heart. The reference to the ideas and mission of Pierre de Coubertin is really important as sport and culture work together because they unite people in many ways and teach such important values ​​as peace and respect.”

Finally, Thomas Bach answered the questions asked by the students and held an interesting conversation about sport, Olympism, his path to the Olympic championship in fencing, which his trainer convinced him to play when he wanted to play football. Thomas Bach said that the sport teaches not only to win but also to lose, but encouraged the children to never give up.

At the end of the meeting, all students were invited to visit Lausanne, the headquarters of the International Olympic Committee. “See you in Lausanne,” concluded Thomas Bach.